How many CPU architectures (platforms) can Java run?

October 19, 2019
Java is famous for its cross-platform feature, and declared as Write once, run anywhere (WORE).

Well the question is, how many platforms Java can run?

The Architecture (source code) class in the jdk.internal.vm.ci.jmod module indicates the CPU architectures Java Virtual Machine can run on: 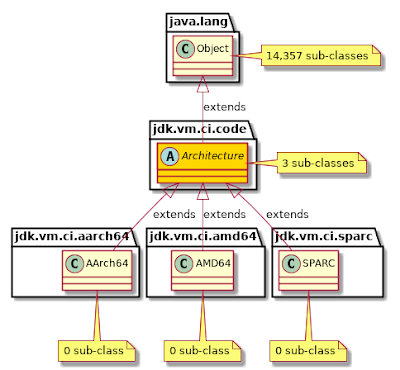 We can found Java can execute on the following three (3) CPU architectures / platforms:
So Java can be executed from mobile device to laptop, from home/office used desktop to servers sittings in data centers.

Popular posts from this blog

What is Java Bridge Method (ACC_BRIDGE)?

Java method could be tagged with bridge (ACC_BRIDGE) in the .class file, denotes this method is generated by Java Compiler for type erasure purpose of Java Generics.

Code is the best document, so let's check the code of java.util.ArrayDeque as an example for the details.

In the source code of ArrayDeque, there is only one (1)clone() method defined, as bellow:

UML Diagram of ArrayDeque.class
Here are the details of these two clone() methods:
publ…
Read more

What is Java Synthetic Class (ACC_SYNTHETIC)? with the example of BoundMethodHandle$1.class in Java package java.lang.invoke 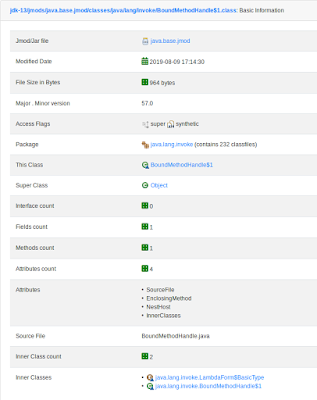 When a .class file marked with the ACC_SYNTHETIC flag, it indicates the .class file was generated by compiler and does not appear in the corresponding .javasource code.

Binary Code is always the best document, so let's check an example: the BoundMethodHandle$1.class class in java.base.jmod in JDK.

The class file BoundMethodHandle$1.class has been marked as synthetic flag, as shown bellow:


And this class is used by the container class BoundMethodHandle:

Evolution of Java Dependency Diagrams, from Java 7 to Java 13 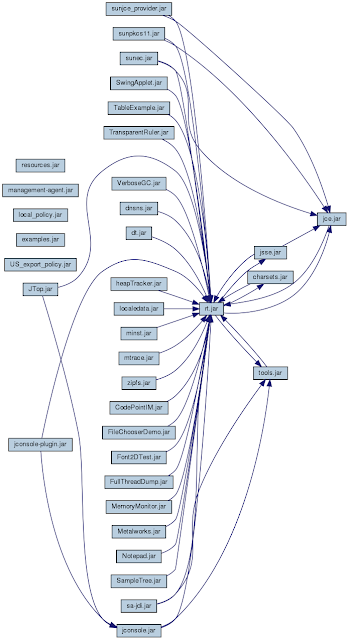 The OpenJDK community is trying to modularize the OpenJDK itself in the past years, and the following Dependency Network diagrams of OpenJDK jar/jmod files can show it visually.

From the diagrams above, we can have the following points:

OpenJDK 7 and 8 is very similar, well there is a big change Since OpenJDK 9 Since Java 9, the keyword module has been introduced for the Java Platform Module System. From the dependency network diagram point of view, with the module system, there is (almost) no circular dependency between JDK library .jmod files.

There is slow evolution from OpenJDK 9 until OpenJDK 13, via minor changes The reason is the community is keeping improve the moralization between JDK libraries.